Some of you have been lucky enough to hear our own Steph Carse sing.  Some have even shared a meal with him.  But you may not know these things about Steph.

Enjoy this article from GRAND magazine... the magazine for GRANDPARENTS.   Stephs own Grandma "Mamie" gave him his passion for music...

"My passion for music truly comes from my Grand Ma (Mamie)"

GRAND: Steph, a lot has happened to you since our first interview in 2005. We know that your Reach Out CD was a big hit in Canada. Can you tell us a little bit about the success of Reach Out?

Steph: "The album Reach Out was released in Canada and hit the top-ten bestselling chart. First, it was very exciting for me to return to my hometown and perform for the folks out there. Montreal is where I was born, so it gave me a chance to do a tour in different cities and meet the people face to face.

"Then PBS aired the Reach Out television special, which gathered five Crystal Reel Awards from the Florida Motion Pictures and Television Association, including Best Song and Best Male Vocalist. Talk about an exciting moment for me, and the people involved in the project!"

GRAND: "Reach Out" was named the Official Thank You Song of the American Red Cross; can you tell us about it?

... MORE:  Click to READ the whole interview in Grand Magazine

For those of you who know Steph... you know what a wonderful and giving person he is.  In addition to donating his song "Reach Out" to the American Red Cross... Steph has donated other songs, and his time, to many charitable causes.

While Stephs career is truly INTERNATIONAL (he sings in French, English, Italian and Spanish), he makes his home right here in Central Florida and is available for special engagements.  Steph is popular with corporations and conventions who know they can depend on him to deliver an inspiring show for their event ... or even sing a custom song to fit the theme of their convention or sales meeting.

See the VIDEO of the making of "Reach Out" for the Red Cross.

See the MUSIC VIDEO for "Reach Out" on YouTube

Click for Steph's profile on Connections Groups with his DEMO video.

SUBSCRIBE to Grand Magazine for yourself - or a loved one...
Digital subscriptions are FREE for a limited time. 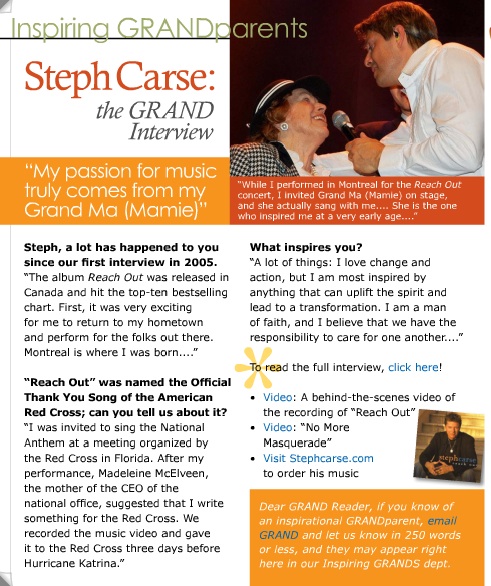 Comment by Teri Siciliano on June 18, 2011 at 12:23am
Tha magazine definitly got it right and we are lucky to have Steph here in Central Florida. He is not only extremely talented but he has a heart to go with it. He has done so many things to help so many it is difficult to list. "Reach Out" is a fabulous song, one of my favorites, it says so much and has helped so many. Thank You Steph for all you do.