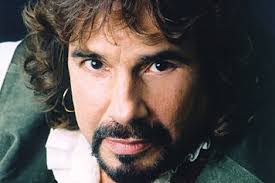 Bertie Higgins, the "trop rock" artist from Tarpon Springs, is best known for his 1981 chart topper, Key Largo, a sentimental ballad about a lost love.

We had it all

Well, now he's starring in his own late, late show.

It's a movie called Poker Run, a bloody thriller revolving around the plight of two couples, rich urban bikers, who unwittingly take a motorcycle road trip with a gang of psychopaths. It was filmed in the California desert; Higgins plays one of the "good guys."

"It's a scary little movie that doesn't end well," he said during a phone interview from his home in Burbank, Calif.

Higgins also is producing the film, which he co-wrote with his 25-year-old son, Julian Higgins, and writer Larry Madill. The younger Higgins directed the 96-minute flick.

This is the second film venture for the father and son team, who named their production company Cayo Largo.

Their first movie, The Wrath, is expected to be released on DVD this year. A St. Petersburg music mogul, Bill Edwards, was the executive producer on that film.

Working with his father is an "incredible experience," said the younger Higgins.

"My dad's been there supporting me in everything I do, riding the roller coaster of success and happiness that comes with making movies," he said. "We're hoping to get back to Florida and create some movies there, too."

They moved to California five years ago so that Julian could attend film school.

Julian Higgins said he's not a biker, but has been intrigued by the culture of these "modern cowboys riding around on bikes," for a while.

"Most of them are the biggest-hearted people you'll ever find," he said, "but at the same time there is this small scary underbelly."

Acting in a horror film is quite a departure for Bertie Higgins, who's been touring Las Vegas and the world with his group, the Band of Pirates. They croon of love and moonlit tropical nights.

He loves the travel, but said his heart is still in the Greek community where he grew up.

"I hope to get back to Tarpon Springs soon and see Nana Banana," he said, referring to his 93-year-old mother, Charlotte Higgins, who still lives there.

He's the great-great-grandson of Johann Wolfgang von Goethe, the German poet who penned Faust, and thinks he inherited his ability to turn a phrase.

Bertie Higgins became a ventriloquist at age 12 and was a drummer in the Tarpon Springs High School Band.

Shortly after graduating from high school in 1962, he joined Tommy Roe and his band, the Roemans, opening for stars like the Rolling Stones, the Beach Boys, Roy Orbison, Tom Jones and others.

When they broke up in the late '60s, Higgins returned to Tarpon Springs, where he dived for sponges, wrote songs and sang in local bars, remaining largely unknown — until he spawned Key Largo.

The song remained in the Top 40 for months and became an international hit as well.

His 10th album, Captiva, was released in March. In it, Higgins puts a tropical spin on cover songs made famous by others, including Brown Eyed Girl, Brandy and Blue Bayou.


It's been picked up by Showtime and is slated to air in December. It will be released on DVD by the end of the year, Higgins said. The movie trailer for the R-rated film can be seen on YouTube.
"I'm not out to change the world with my films, but I'm out to entertain people, make a few bucks and have a little fun," Higgins said.

"It's a tough little movie, but we hope people are going to love it."

GET IT EARLY! Amazon has put Bertie's newest film, "Poker Run" up for pre-orders in time for Christmas. It will be available on December 1 this year and can be ordered now. So, get the jump on, grab yourself a copy and scare the living daylights out of you and your loved ones this forthcoming holiday season....Arrrr!

"Poker Run", our latest feature film, is now available for a small fee on Video on Demand. It should be listed on your local cable supplier and if you can't find it, it will be there shortly.

We know that Charter Communications has it now as does Time Warner cable television.

Beginning December 1, '09, it will be featured on the premium channel, Showtime, and will also be at your local retail and video stores.

Please be aware that "Poker Run" is R rated for language, violence and brief nudity, so if this is not offensive to you, enjoy!

Be well, our good friends, and thanks!