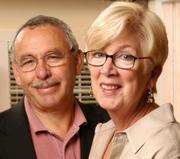 Join us for lunch as Tony and Jonna Mendez describe their exciting careers as former Central Intelligence Agency Chiefs of Disguise. Tony Mendez spent 25 years working undercover as the Chief of Disguise, and later as the Chief of the Graphics and Authentication Division, to change the identity and appearance of thousands of clandestine operatives during the Cold War. Jonna Mendez worked as a CIA intelligence officer, specializing in clandestine photography, and teaching operatives how to use spy cameras and intelligence processing, while living undercover for 27 years in Germany, Thailand, and India. Both Tony and Jonna have been featured in two Discovery Channel programs about the CIA and are the recipients of numerous awards. Noon-1 p.m. Free. Bring your lunch or pre-order a lunch for a small charge. Call (407) 836-7010 for reservations.