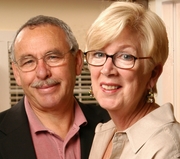 Jonna and Tony Mendez, authors and former members of the CIA, share their fascinating and thrilling experiences during an elegant dinner. Jonna Mendez discusses the roles women play in intelligence operations in “Sisterhood of Spies in the CIA,” and Tony Mendez takes you inside the elaborate, covert operations used against the Russians, the East German Stasi, and other enemies during the Cold War in “CIA Master of Disguise.” Also, don’t miss opportunities to have them sign copies of Spy Dust written by Jonna and Tony Mendez and The Master of Disguise written by Tony Mendez, available in the museum store. CIA veteran Jonna Mendez served 27 years as technical operations officer and chief of disguise. Former CIA Chief of Disguise Tony Mendez spent 25 years undercover and is the recipient the CIA Intelligence Star of Valor and the Trailblazer Award. 6 p.m. reception; 6:30 p.m. dinner and program. $50 for Members; $65 for non-members. Call (407) 836-7010 to R.S.V.P. Presented by Cross, Fernandez & Riley, LLP.