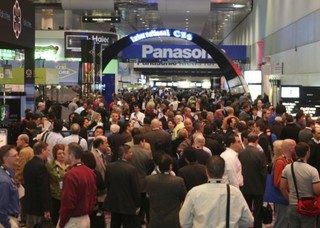 An anthill, that’s how I’d describe it in one simple statement — an anthill.

I’m talking about CES, the International Consumer Electronics Show that happened in Las Vegas recently. The event was so large it filled both the Sands and Las Vegas Convention Center and several other surrounding hotels. It is the world's largest consumer technology tradeshow featuring 2,700 exhibitors, some with exhibit spaces larger than the condominium complex I call home.

CES is so big that they should set it up permanently and sell annual passes like Disney World, with vendors moving in and out as product cycles change.

But by now you’re probably saying to yourself, "Hey! This is a mobile payments site; I don’t care how long you had to wait in line for a cab." Or "I don’t want hear about how tech geeks were actually dancing at a CES party; let’s get to the mobile wallet stuff already!"

Well, my friends I intend to do just that. Gather 'round as I share all the latest mobile, payment innovations from CES with you.

There was a myriad of virtual payment innovations available on the CES show floors, but there wasn’t much in the way of grouping; there didn’t seem to be a much needed mobile money pavilion. The various vendors were peppered throughout the sprawl of convention space that made up CES.

There’s not enough space to report on all my findings here, so I’ll just focus on one or two solutions that really summed up the next wave of computer-generated payments, and let you come explore CES for yourself next year.

Armed with my trusty Ecco walking shoes and Google Maps on my smartphone I set out to explore the electronic payment options exhibited at CES. That’s right: Google mapped the show floor and interiors of both convention centers allowing me to use my GPS-enabled mobile device to find my destinations.

The first place I wound up was at booth #35165 where I met up with Erica Santiago, director of marketing of CSI globalVCard. CSI globalVCard is a virtual MasterCard app currently designed for B2B use but launching for the consumer market in the second quarter of this year. It's an alternative payment method with mobility to create secure single and multi-use MasterCard account numbers. A unique single-use virtual MasterCard account number is generated for each payment without the plastic card. It's perfect for card-not-present transactions, such as online, over the phone, catalog purchases, mail in payments, or anywhere MasterCard is accepted.

GlobalVCard enables you to issue a card to your employee for travel but limit their spending to hotels, restaurants and car rentals, and not nightclubs, thrill rides, and, well, you get the picture. You can control the days, hours and even number of transactions for usage. The amount you set is able to be spent where you decide and by whom you authorize, all controlled from your smartphone or tablet while you and the person you issued the "card" to are on the move.

The CSI globalVCard advances the Starbucks idea of virtualizing an account in a mobile app a few steps further, expanding the idea of what can be done with a line of credit coupled with a smart, connected device. It's available on iOS, Android and BlackBerry platforms.

Leaving the Las Vegas Convention Center I grabbed one of the shuttle buses to the Sands Convention Center at the Venetian and met up with Gonzague Gay-Bouchery of K.K. Tibanne, otherwise known as Mt. Gox, the world’s most established Bitcoin exchange. They are the only multi-currency Bitcoin trading platform allowing you to trade with the entire world in your local currency.

Mt. Gox has had a mobile app for a while allowing individuals to buy and sell bitcoins while on the go, and make easy payments wherever Mt. Gox or bitcoins are accepted. But the big news was a Bitcoin ATM that was setup front and center in their booth.

The ATM allows users to withdraw bitcoins from their Mt. Gox account as physical currency in the form of bitbills. Bitbills are described as "bitcoins you can hold in your hand." According to their website, the Bitcoin ATM bridges the gap between virtual currencies and cash, allowing real time cash purchases of bitcoins and facilitating many other transaction types using bitcoin as a medium.

Bitcoin ATM will become the fastest growing and largest bitcoin related startup entertaining licensing agreements and additional funding from high net worth holders of bitcoins such as ‘mining pools’ and early adopters (and old-school flat currencies if we must). Bitcoin ATM is planning 200 Bitcoin ATMs worldwide by Q3 2012.

If you’re in mobile money and haven’t investigated virtual currencies, the time to start your investigation is now. Virtualization of currency is a growing threat to cold hard cash around the world. Many societies, especially emerging markets, are becoming mass adopters of mobile money services and are trading in their cash for the convenience, flexibility and security of virtual currency.

There’s a lot of rumbling in the financial service channels out there about cashless societies and cashless retailers. The costs associated with using, securing, and transporting physical currency is expensive and risky. The recently retired Chairman and CEO of Precash, John Chaney, wrote an article several years ago emphatically stating cash isn’t free of cost, and how most people don’t even think about how much is spent maintaining and protecting physical currency.

It’s interesting that the subject of cashless economies came to light while I was in a city like Las Vegas where cash has been king for so long. But as more electronic options become available and money and transactions continue to transition into mobile devices, are we headed towards a virtually cashless society in Generation-M?