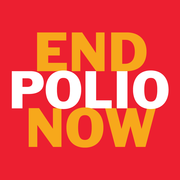 The City of Orlando, in conjunction with 50 local Rotary clubs, will Light Up Orlando red to create awareness of the work around the world to rid the world of this paralyzing and deadly disease. Join the city and Rotarians at the Orlando sculptures Take Flight, Union, Cedar of Lebanon at Lake Eola, Global Convergence at the Orange County History Center, and Astrogenesis II on Orange Avenue at Church Street, and venues including the ORLANDO sign at Camping World Stadium, Tower of Light and Fountains at City Hall, the Lake Eola Fountain, and the Amway Center Spire. Look along the 408 Expressway for red lighting and while riding the Orlando Eye. Tag photographs you take at the Orlando structures with #District6980 #EndPolioNow. Famous structures all over the world will be lit red with the End Polio Now logo, such as, the Giza Pyramids, Sidney Opera House, and Big Ben.

Lighting Up Orlando comes at an important time in the fight to eradicate polio, which would be only the second human disease to be eradicated, after smallpox. Case numbers of the disease have never been lower, and only three countries (Afghanistan, Nigeria, and Pakistan) have not stopped transmission of the wild poliovirus.

Commissioner of District 3 and Rotarian Robert Stuart stated that, “Ending polio in the world is one step forward for all people. With Orlando being a major travel hub, we certainly do not want to see this scourge or the many other diseases that Rotary International is fighting through its PolioPlus campaign to resurface here.” Stuart has been helping with the PolioPlus initiative since joining Rotary in 1996.

However, a funding gap puts this historic progress at risk. Experts say an additional US$1.5 billion is urgently needed to ensure the world capitalizes on recent gains against polio and ends this disease for good. Dan Semenza, Rotary District Governor 6980 states, “We have to frontload the funding to make sure that the disease doesn’t resurge in a couple of years devastating more lives. We are only a plane ride away for reigniting the disease anywhere in the world if we fail to complete the eradication process.”

In 1988, when Rotary and its partners committed to eradicating the disease, polio paralyzed more than 350,000 children per year in 125 countries – or, more than 1,000 children per day. Since that time, the number of wild polio cases has been reduced by 99.9%, with less than 26 in three countries to date in 2016.

Rotary has contributed more than US$1.5 billion to ending polio, including funds contributed by the 50 Rotary clubs of Rotary District 6980 in 5 central Florida counties. Funds contributed to Rotary for polio eradication are tripled thanks to a 2:1 match by the Bill & Melinda Gates Foundation.

Rotary is joined in the fight to end polio by its partners in the Global Polio Eradication Initiative, a public-private partnership that also includes the World Health Organization, the U.S. Centers for Disease Control and Prevention, UNICEF, and the Bill & Melinda Gates Foundation.

For further information and to donate, visit www.endpolio.org.