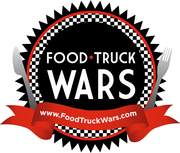 FOOD TRUCK WARS will continue to bring it’s phenomenon to Foodies throughout the great State of Florida. Our next stop Titusville: December 1st. Location: Route 1 between Pine St and Broad Ave Northbound.

40 Gourmet Food Trucks from all over the State will line the streets to compete in 5 categories. The competition has been extended this round to include the Spirit Award, as well as the People’s Choice Award, Top Sales, Delectable Dessert and Casual Cuisine. There will be some new trucks debuting and some from previous rounds seeking revenge. Foodies will have a chance to vote on cuisines from Latin America, British, Caribbean, Gourmet Desserts and everything in between.

Celebrity Chef Judges, spear headed by Chef Jim Whaples, retired President of the Florida Restaurant & Lodging Association will be on hand to judge Casual Cuisine and Delectable Dessert, while the people will judge the prestigious People’s Choice Award.

Main Street Titusville and the Titusville Downtown Merchant Association will be at the event working along with the shows promoters to raise money in support of local charities.

The phenomenon of Gourmet Food Truck rivalry (all in the name of good fun, of course) has been a Huge Hit. At the inaugural event in March 2012 an estimated 30,000 people turned up. 37 food trucks sold out of food completely.